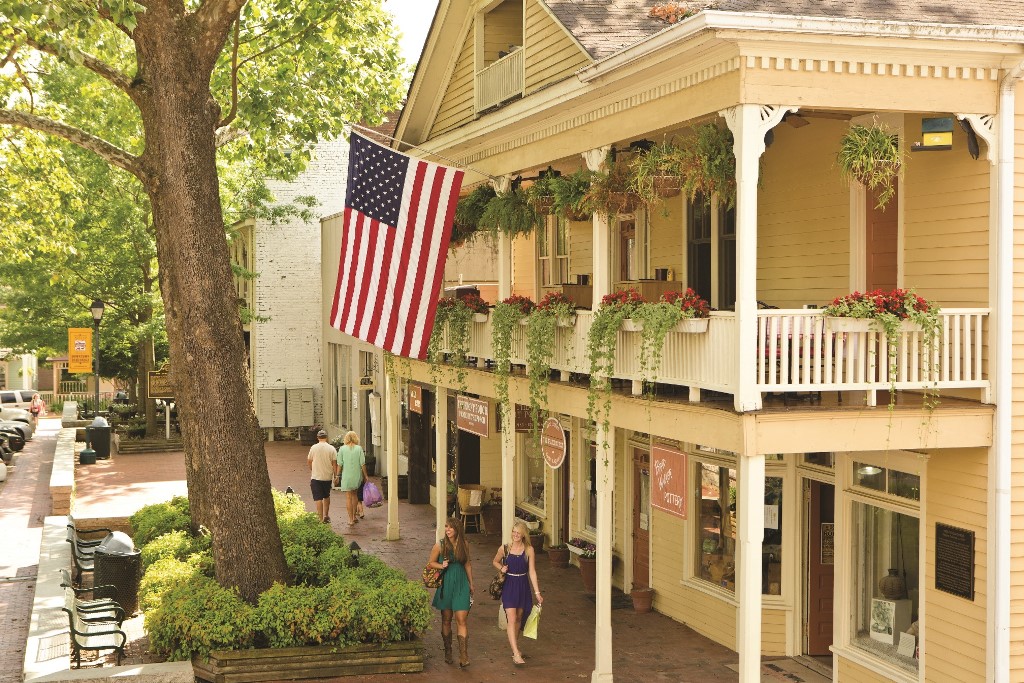 Courtesy of the Georgia Department of Economic DevelopmentThe Dahlonega Main Street program proudly announces its recognition as one of only 10 semifinalists for the 2015 Great American Main Street Awards®. This prestigious award, presented by the National Trust for Historic Preservation, recognizes outstanding efforts by Main Street Programs for supporting their community’s downtown as the place to live, work, play and visit; executing the Four-Point Approach of Promotion, Design, Economic Development, and Organization; maintaining a commitment to historic preservation; and strengthening public and private partnerships.

Dahlonega Main Street has been actively involved in master planning, designing and implementing pedestrian/streetscape improvements, building downtown green space, and planning for new residential development. Forging a partnership with the Dahlonega-Lumpkin County Chamber of Commerce, Dahlonega Main Street has built a diverse base of downtown customers including local residents, visitors, and university neighbors by marketing downtown as North Georgia’s best shopping and dining destination with 63 retail shops and 18 restaurants. Joel Cordle, Director of the Main Street Program & Downtown Development Authority explains, “Dahlonega’s economic success has been built upon our precious historic architecture and resources. Local leaders, partners and stakeholders have planned and worked diligently to preserve and promote this historic village as an economic center of North Georgia. Even through the recession, Main Street and local partners have seen a thriving downtown economy that has generated investment of 62 million dollars in private and public construction, netting 65 new businesses and 248 new jobs since 2004. Our beautiful, historic little town of 5,000 is not only the most historic and prosperous village in Georgia, but is also worthy of the honorable designation, ‘Great American Main Street’.”

Former Director of the National Main Street Center and Georgia Main Street, Billy Parrish, states, “Dahlonega Main Street has built a complex, comprehensive and successful economic development program on the historic bones of its well-known and well-loved downtown square.” He continues that over his decades of work in Main Street, “only a fraction of Main Street programs achieve the level of commitment and sophistication that Dahlonega, a small North Georgia city, has accomplished.”

Dahlonega’s historic preservation and downtown revitalization efforts began by saving the 1836 Courthouse for use as a Gold Museum in the 1970s. Forty years of action and perseverance have made Dahlonega a leader in historic preservation. Billy Peppers, the Director of Georgia Main Street states that Dahlonega has “delicately danced the careful tango of historic preservation and economic development in a manner that reflects history and prosperity for residents and businesses. The downtown square is flanked by historic architecture, including one of the most substantial collections of wood buildings in the Southeast, including wonderful second floor porches.” Visitors are delighted with downtown’s original wood buildings and second floor porches around the Public Square, the intimate scale of the streets, and by the abundance of trees.